Twitter’s Testing Audio Clips in DMs with Users in Brazil


After launching audio clips in tweets back in June, Twitter is now also testing audio DMs with some users.

As you can see in this screenshot, posted by social media expert Matt Navarra, the new option, which Twitter is calling ‘Audio messaging’, enables users to record and send audio clips via direct message. 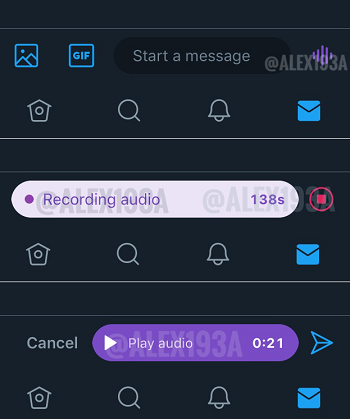 Going on this example, it looks like audio clips in DMs will be limited to 140 seconds, the same as they are in regular tweets, with a recording button added to the right side of the message composer bubble.

Whether this is what the final version of the UI will look like, we don’t know at this stage, but clearly, Twitter is getting closer to a broader roll-out of the option.

As outlined in the top example, the option is currently only being tested among users in Brazil.

Audio tweets seemed to spark a bit of buzz early on, with several big name celebrities jumping on the option and posting new forms of tweets.

But since then, it doesn’t appear to have become a major feature, with seemingly fewer audio tweets being posted over time.

But then again, that’s a fairly narrow perspective – a key focus of audio tweets was to open Twitter up to more people of varying capacity, and in this respect, audio tweets have definitely added more ways for vision-impaired users to engage with Tweet content.

That’s also sparked Twitter to boost its efforts on inclusive tools. Earlier this month, the platform announced several new initiatives intended to improve the accessibility of tweets, with audio tweets being a key impetus in this renewed push.

Audio DMs would further add to this, while also giving all users new, creative options for connecting with people via message.

It’s not likely to be a ‘game-changer” for most, but it’s an interesting, inclusive option that opens new avenues for tweet connection.

We’ve asked Twitter for more information on the current test and will update this post if/when we hear back.

Bitcoin (BTC) Price Prediction – September 30, 2020BTC/USD has retraced and fallen to the previous

During VJUNC, Jamf announced the acquisition of Mondada, the creator of Kinobi and Kinobi Pro.