With the US Presidential Election only 27 days away, Facebook has provided what looks to be its final update on its election preparedness tools, including new prompts on the ballot counting process and the activation of its Elections Operations Center.

First off, Facebook has announced a range of new notifications which will be shared in user home feeds, across both Facebook and Instagram, in order to keep people up to date on official poll information.

“When polls close, we will run a notification at the top of Facebook and Instagram and apply labels to candidates’ posts directing people to the Voting Information Center for more information about the vote-counting process.”

Over the past month, with US President Donald Trump refusing to assure a peaceful transfer of power in the case of him losing the vote, Facebook has become increasingly worried that the President could use his massive social media presence to declare victory, or invalidate the official results, leading to unrest among his supporters.

Facebook does not want to be in the position of amplifying such messaging, which it makes clear in today’s announcement.

“If a candidate or party declares premature victory before a race is called by major media outlets, we will add more specific information in the notifications that counting is still in progress and no winner has been determined.”

Facebook will also take this even further, by providing official updates on the projections for the winner, as they become available. 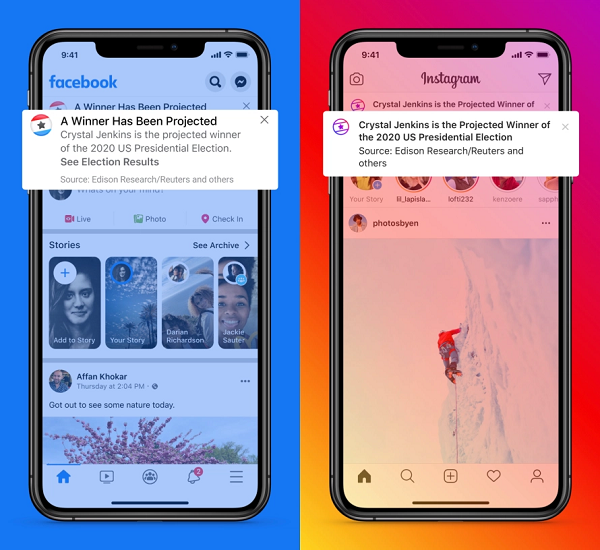 These will also be shared in Facebook’s Voting Information Center, ensuring maximum reach with its official notifications. 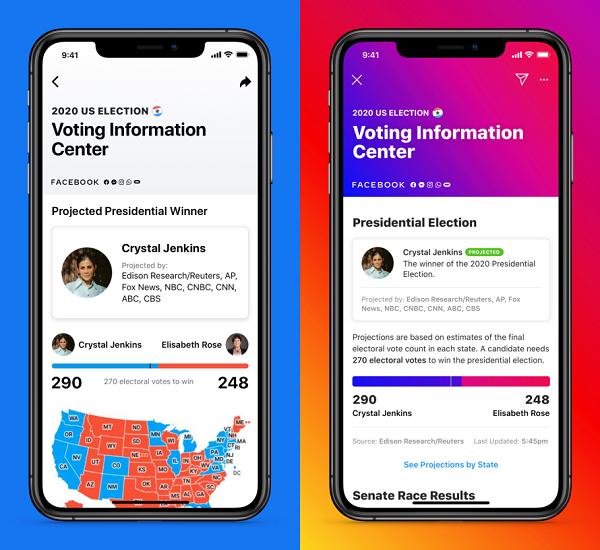 Facebook will also provide additional notes on election integrity, another element that’s been heavily questioned by President Trump in the lead up to the poll.

“As we noted earlier this month, we are attaching an informational label to content that discusses issues of legitimacy of the election or claims that lawful methods of voting like mail-in ballots will lead to fraud. This label provides reliable information about the integrity of the election and voting methods.”

Facebook will also put a temporary halt on all social issue, electoral and political ads after the polls close, further limiting the capacity for its platform to amplify non-official updates.

Of course, we have no idea what’s actually going to happen on election day, nor who the eventual winner may be, but given the ongoing discussion around potential interference in the voting process, Facebook is working to ensure that it plays no part in amplifying any spurious claims.

In addition to this, Facebook is also banning all posts and comments which call for people to engage in poll watching or any other activity designed to intimidate election officials or voters.

Facebook has also announced the launch of its Elections Operations Center for the poll, which will bring together a subject matter experts from across the company “including from our threat intelligence, data science, engineering, research, operations and legal teams”, in order to monitor the process in a more coordinated way. Facebook has taken the same approach with all major elections across the world since 2018.

“Since 2016, we’ve built an advanced system combining people and technology to review the billions of pieces of content that are posted to our platform every day. State-of-the-art AI systems flag content that may violate our policies, users report content to us they believe is questionable and our own teams review content. We’ve also been building a parallel viral content review system to flag posts that may be going viral – no matter what type of content it is – as an additional safety net. This helps us catch content that our traditional systems may not pick up.”

The Election Operations Center will monitor these key trends, in an effort to stop the spread of misinformation and further protect the poll.

Facebook’s 2020 Election approach is the culmination of the various measures and tools that it’s implemented since 2016, when it was heavily criticized for allowing third-party activist groups to interfere in the election process.

At Facebook’s scale, that can have a huge effect, and since then, Facebook has introduced a range of tools and policies to better protect users, and avoid similar misuse. 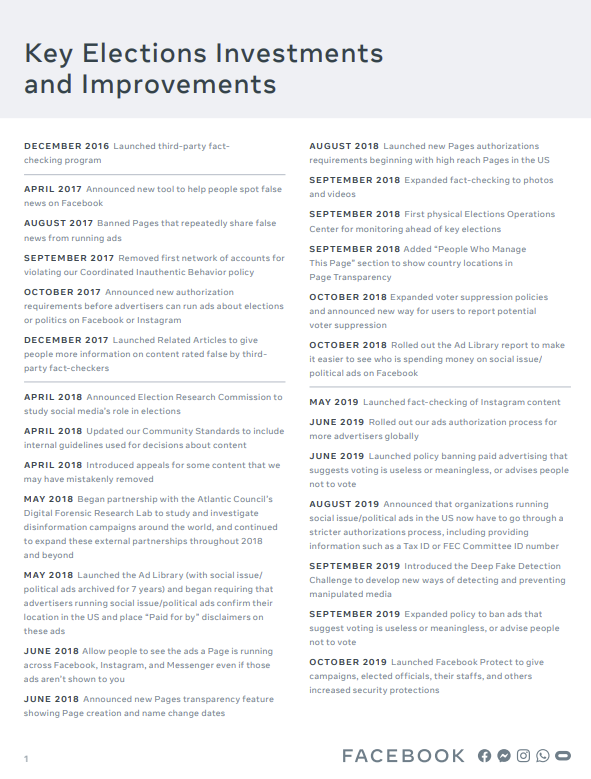 This is just the first page – the full document outlines the complete list of steps Facebook has taken to protect the 2020 vote.

In essence, Facebook is underlining that it’s done all that it can, so that it can’t be accused of failing to act, in any event, this time around. Whatever the result, Facebook has introduced all the measures it can, and while its approach to claims made in political ads is still questionable, given the overall breadth of new processes and tools it’s added, Facebook’s hoping that it’s not the focus of blame come November 5th.

But, of course, it still could be. Facebook is still a key source of misinformation, as has been indicated in various reports, and movements like QAnon, which Facebook took increased action against this week, have still been able to spread via Facebook groups and Pages.

Will Facebook play a key role in the 2020 result?

We’ll have some idea in less than 30 days.

The co-founder and CEO of major cryptocurrency company Abra is clearly bullish on Bitcoin (BTC).

To gain a deeper understanding of how professional investors feel about digital assets, Cointelegraph Consulting

A conversation with Aavegotchi’s Jesse Johnson